SAP Concur Community
Sign In
Turn on suggestions
Auto-suggest helps you quickly narrow down your search results by suggesting possible matches as you type.
Showing results for
Search instead for
Did you mean:
Options

Items sent back to employee/originator

So a reviewer has noted that something is wrong on a report.... the system is working.... BUT, once it is sent back to the user, how does the user know what is incorrect/needs to be fixed.... subsequently, how does an approver know/remember what they asked about?

I see comments, which are good but doesn't always make it easy to follow through, especially on complex reports.

I see the audit feature, which is nice but is a bit "clunky" to go through.

Is there a better way that I am just missing?

Approvers can input an overall comment when they send a report back to an employee, yes, but they can also input a comment on an individual expense. They can select an expense, and any comment that the employee entered themselves will appear at the top of the Expense details, and the Comment text box itself will be empty. An approver can then input a comment directly on that expense to indicate any changes that need to be made. This is the view from the Expense Processor, but the concept remains the same for manager / authorized approvers.

Is that kind of what you were looking for? Let me know if you have any questions; thanks!

I think we are talking about the same thing... using the comments, but it isnt always readily apparent where we are in the process or my memory sucks when it comes to looking at all of the transactions....  I did notice something different in your setup versus mine: 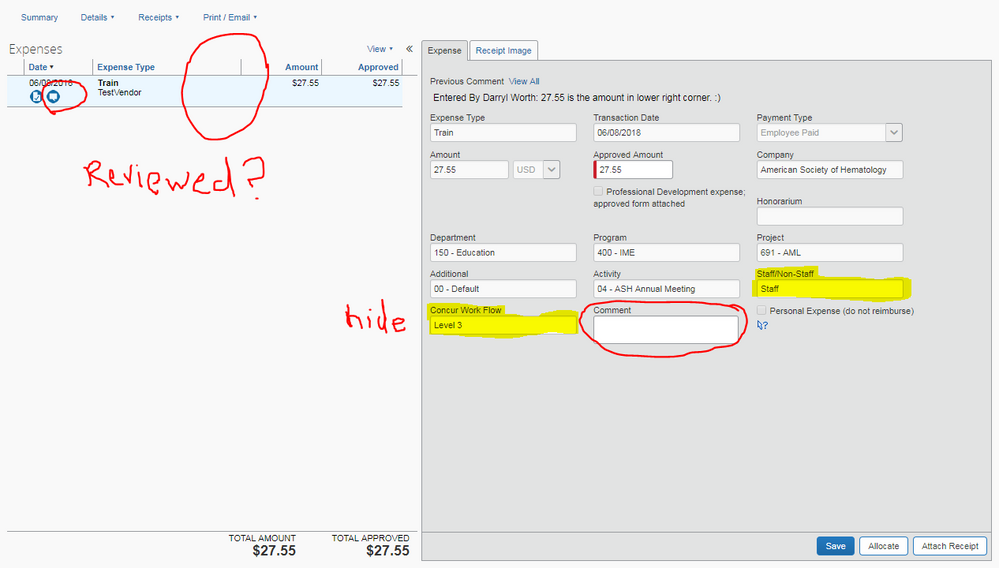 I do not see a "Reviewed" item.  That I think is what I was going for in my initial comments....  If the user(at each level) can mark the items they have approved, then it is easy to follow.  So maybe a list of generically something like:

Does that make sense/is it possible?

To follow up... essentially, every line item should have been reviewed at each step in the workflow and should reflect that before it goes on to the next person in the workflow.

Yes, it does make sense... I think

So the 'Reviewed' tags in my screenshot are only present in the Expense Processor, and those aren't available for manager approvers. I believe that's just a function of the processor. I just took a screenshot there, since I'm not an approver, and just wanted to demonstrate the comment view for approvers.

If you're looking to have a method for approvers / reviewers to send a report back to an employee and specifically show them what needs to be changed, I believe a comment directly on an expense (perhaps combined with an overall comment pointing them to it) is the only way to do that.

If, however, you're looking to introduce multiple reviewers in your approval chains, that can be done. You could just adjust your Approval Routing options so that reports are sent to multiple approvers. For my company, we utilize the Manager > Authorized Approver > Processor method and employ 'pre-approvers' for many of our locations.

Essentially, a 'pre-approver' is authorized to approve any report under $1. So any report they approve will naturally exceed that total, so once they approve it, it gets sent to a second approver for final approval. Sometimes it just goes to their own default approver, and other times they use the Approve & Forward function to direct it to some other approver. The final approver understands that the pre-approver has done their review of the expenses and has sent on the report, verifying that all of the expenses on the report are good to go. If they do catch anything, they send it back to the employee for them to correct before approving the report through.

Is that kind of what you were looking to do? I'm not sure there's an easy way to have a few different reviewers review portions of a report and pass it on to other reviewers, outside of setting the reviewers up as Processors. That granularity is only available in the Expense Processor, and only comes after a report has been approved by a manager or authorized approver, and it sounds like you're looking to do this before the report is approved by them.

I have an expense report that I submitted back in 2017 as an employee and it was sent back to me and I now would like to delete it from my account. How can I do this?

Just open the report. In the upper right-hand corner you should see a Delete button. Should be right next to the orange Submit button.


Thank you,
Kevin Dorsey
SAP Concur Community Manager
Did this response answer your question? Be sure to select “Accept as Solution” so your fellow community members can be helped by it as well.
0 Kudos
Reply